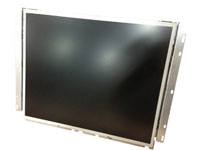 of another? Sure! Under certain conditions that is.

First of all, when would you ever want to do such a thing? Well, perhaps

damaged beyond repair. Sitting on the shelf next to it is a monitor that

picture tube looks horrible. A host of other maladies can befall CRTs,

making them unusable. Wouldn't it be nice to mate the good picture tube

with the fully functioning monitor chassis and create one good working

monitor from the two bad ones? Sure it would!

electronics of another? While there is no hard and fast rule for making

these types of exchanges (transplants?) there are three things that I

look for when I want to determine if I can swap picture tubes: The

resistance of the deflection coils in the yoke, the neck size of the

picture tube, and the pinouts of the CRT socket.

Use the Existing Yoke

Whenever possible, try to use the existing yoke that's already mounted on

the picture tube. The position of the yoke is critical to the proper

alignment of the three electron beams that shoot out of the red, green

and blue electron guns. If the yoke is not mounted perfectly, the colors

will be all messed up. The monitor will be out of "convergence". It will

probably be especially noticeable at the edges of the picture. If it's

possible to leave the existing yoke in place, the factory alignment of

the CRT will be preserved.

How can you tell if the yoke will work with the different monitor chassis?

measure the DC resistance of each of the two coils in the yoke. The

horizontal deflection coil will have a low resistance. Somewhere around 2.

and 33" may have even lower resistances (as low as 1.3 ohms) as higher

current levels are required to deflect the electron beams.

The resistance of the vertical deflection coil may vary quite a bit. The

resistance in some monitors may be around 56 ohms. In others, the

resistance of the vertical deflection coil may be approximately 15 ohms

or less. As with the horizontal deflection coil, the resistance drops as

the size of the picture tube increases. The resistance of the vertical

the good picture tube. If they're the same (or even pretty close) it will

probably work. If you don't have the other yoke to compare to, you can

try connecting it up just to see what happens. However, it is possible

trying to power a yoke with too low a resistance. If the picture looks

really distorted, the yoke is probably incompatible with the monitor

chassis. Don't leave it on too long as you may damage the monitor

circuitry. Most incompatibilities seem to show up in the vertical

deflection coil of the yoke as they vary quite a bit in resistance.

the bad CRT and install it on the good picture tube. Swapping yokes

requires removal and replacement of the purity and convergence ring

assembly. This set of magnetic rings is used to align the three beams in

the CRT. Since it sits between the yoke and the end of the picture tube,

it has to be pulled off to allow the yoke to slide off after it.

to removal, you should be able to put it back in the exact position

required for proper convergence. Its position on the neck and the

rotation of the ring assembly are both critical, so be sure to mark both

before removing the assembly for the neck of the picture tube.

After marking the position, loosen the screw that clamps the ring

assembly in place and carefully slide it off the neck of the CRT. The

of the glowing CRT neck, so be cautious when you handle it.

Mark the position of the existing yoke on the neck of the good CRT.

Loosen the yoke clamp and slide it off the neck of the picture tube.

Don't throw it away! You may want to use it for a future transplant. Also,

if the two yoke connectors are different, you'll want to remove the yoke

yoke. Be sure to mark which wires are for vertical and which are for

horizontal! Remember, the horizontal pair has a much lower resistance

than the vertical pair. If you screw this up, you'll probably blow out

the vertical output transistors or fry some resistors on the monitor

Reinstall the replacement yoke in the exact same position on the CRT. Do

the same with the purity and convergence ring assembly. With everything

hooked up (and if you're lucky) you should have a perfectly good picture.

If the picture is slightly out of convergence (the red, green and blue

slightly back and forth to bring the edges into proper alignment. Use the

yoke wedges and clamp the yoke in place when you have a good picture. You

that tube. The ring assembly stays with its own picture tube and does not

get swapped with the yoke! If you cannot converge the picture tube, you

the service manual. This can be a real pain but if the picture is

unacceptable you'll have to do it.

Of course, the yoke is only one of your considerations when you're

swapping picture tubes. The other is the CRT itself. Look at the neck of

the picture tube. Is it fat or skinny? We have two common sizes: 22.5

if the neck diameter is different. I strongly discourage the swapping of

neck boards between monitors! The neck board of a monitor is an integral

monitor. Neck boards are not designed to be interchanged between monitor

If the neck size is the same, the swap will probably work. There are

standard pinouts for the majority of the CRTs we use in videogames. For

the 29.0mm neck size, the pinouts are as follows:

For the 22.5mm neck size, the pinouts are as follows:

If the pinouts are the same, the CRT should be electrically equivalent.

However, the plastic end cap that indexes the CRT pins to the CRT socket

may not be the same. This may prevent mating the socket to the picture

tube. On some CRTs this cap is loose and can be removed from the end of

the neck. If so, you can slide the caps off and swap them between picture

tubes. If the cap is glued on the end of the CRT, you probably will not

be able to remove it. Remember, this is the most fragile part of the

originally evacuated from the picture tube. One false move and you'll

students put it, "you'll let the vacuum out!".) If the end cap is glued

on, you'll probably have to leave it. In this case, you may be able to

CRT swap if I have to mess with it to that extent.

That's about all there is to it! Although you may not be successful in

all cases, you've got nothing to lose by trying a CRT transplant. If it

doesn't work, you will probably not wreck anything. If it does work,

you'll have another monitor to put out on the route!